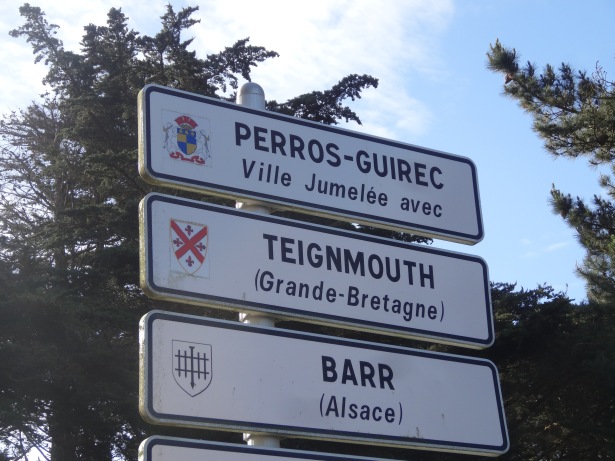 The early May bank holiday weekend saw the annual twinning exchange between Teignmouth and its twin town in Brittany, France, the seaside fishing village of Perros-Guirec. This year the twinning visit started with a night crossing of the channel, so the group of nearly 50 representatives of Teignmouth disembarked blinking in the French sunshine after one of the calmest crossings on record. After a short coach journey, the group arrived in Perros to be greeted by their French counterparts, and after a rapturous reception, the group dispersed to settle in with their hosts.

During the first day the twinners were free to explore the local area and numerous events had been organised by our hosts depending on their own hobbies. Some Teignmouthians were taken on sailing trips, other got to walk the stunning ‘Sentier des Douaniers’, the coastal path that shows off the amazing pink granite formations after which the local area is known, while others of a musical inclination got the chance to play together. We were blessed with stunning weather, and the warm spring sun shine really showed of this beautiful part of Brittany to best effect.

The first evening saw the official welcome at the Perros-Guirec town hall, where we were greeted by the French Lord Mayor,  Erven Leon. Erven officially welcomed the Teignmouth party, and commented on how the twinning had been going strong for over 40 years and it was great to see so many familiar faces. He also commented that it was great to see so many people from England crossing the channel for this visit, a marked Increase in numbers from the equivalent visit a couple of years ago. He noted that tourism was important the local economies of both towns, so event such as twinning are very important in that they promote travel to both the domestic and international markets.

Erven’s speech was answered by Teignmouth’s own Lord Mayor, Terry Falcao, who commented that he was very proud to be in Perros as the Queen’s representative, and slightly relieved not to be representing President Trump, which drew a wave of chuckles from the crowd. The French audience were also most appreciative of the fact that Terry delivered his speech in French, including announcing to all present that he will be getting married to his fiancé Judy in September, and then asking Judy to translate his comments into English for those in the audience that didn’t speak French.

The formal part of the proceedings was then brought to a close with an exchange of gifts, the French receiving a painting from local artist John Skinner, while Terry received a recreation of an old poster promoting visits to Perros.

Both Mayors then shot across town to the sea front exhibition hall to formally open the Anglo-French art exhibition, where local French artists had their works displayed alongside a healthy contingent of Teignmouth based artists whose work had been specially brought across the channel. The exhibition was formally opened, an event known as ‘Vernissage’ in French, which translates as varnishing, the process used to finish certain works of art.  Both mayors were called upon to give another speech, and Terry had a further chance to practice his French, before the lectern was handed over to the join organisers of the event, Liz Lockyear from Teignmouth’s TAAG centre, and Claude-Olga Roukavichnikoff-Pilon. Liz also delivered a speech in French, ably assisted by Sandra Pascal, a Teignmouth based French teacher who had crossed the channel with Liz and exhibition founder Eric Haynes a few days earlier to set up the exhibition ready for the official opening. In Liz’s speech she noted that the exhibition was now entering a new phase of its existence as the baton was passed to a new generation, but she praised the effort of the ‘old guard’ who had done so much to make the annual event such a success, particularly David Harrison who had chaired the English committee for many years, and also Teignmouth artist Eric Hayes, who despite being in his nineties was still a very active participant, and had several paintings in this year’s exhibition.

Day two started with a very moving ceremony at which the town of Perros remembered those people deported during the war by the Nazis, many to death camps from which they were never to return. Seeing the two majors standing shoulder to shoulder at the ceremony was a very moving moment, and Teignmouth mayor Terry Falcao commented that he was ‘honoured to be able represent Teignmouth at this important event and show that both England and France will never forget those who were persecuted for their beliefs in the second world war.’

The day continued with everyone packed into their host’s cars and ferried along the coast to one of Brittany’s most photographed locations, the scenic coastal village of Plougrescant. Here we got to walk down to the coast and view the houses which have been built quite literally amongst the boulders, huge rocks being incorporated into various cottages as gable ends, the most photographed being a fisherman’s cottage on the foreshore which is sandwiched between two huge boulders which make up its end walls. Some of the fitter and more adventurous also got to visit the Gulf of Plougrescant, a gash in the rocks which at high tide with rough seas produces some spectacular plumes of flying foam and water, not a place to be near in a boat.

The other highlight of the trip was a visit to the nearby Saint Gonery’s Chapel. This is a very old chapel, best known nowadays for its sharply inclined spire. It has strong associations with the early Britons who crossed the channel from England and Wales to escape religious persecution, and after whom Brittany is named. The original small chapel was

a placed where people came to be healed, and proved so popular that it had to be frequently extended, until it reached its present size. The vaulted ceiling is famous for its biblical illustrations which has been restored and give you a great idea of what it would have been like to be inside a medieval church where illiterate peasants learnt about the bible from the ceiling illustrations.

The day concluded with a formal dinner at the Perros Golf Club, which was preceded by more speeches, this time from the chairmen of the two twinning associations, Max Enard started for the French, followed by Andy Benham for Teignmouth. Max welcomed everyone to his town and commented on the longevity of the twinning exchanged, and paid special thanks to Eric Haynes, our oldest travelling twinner, who was seated on the top table along with the majors of the two towns. He also talked about the history of the area and how proud they were of their heritage.

In reply Andy Benham noted that this was one of the largest groups to have crossed the channel for several years, and that the twinning was not just surviving, but flourishing. He also thanked Teignmouth major Terry Falcao for taking the time out of his busy schedule to make the visit, and how much the Twinning Association appreciated the support of Teignmouth Town Council. He also thanked Councillor Paul Burgess, the Deputy Mayor, and his wife Nicky for also making the trip, as having next year’s mayor see what the twinning exchange is all about will really help when the French come to visit us next year.

The dinner also saw an exchange of gifts between the two Associations, with Teignmouth giving a mosaic created by local artist, Michelle Greenwood-Brown, while in return we received a large number of French language books. Each year the Association receives a present of French language books, and these are then donated to Teignmouth Library, where they are on display and proving to very popular with Teignmouth locals, to the point that the librarian is now looking into buying more.

While on the first day we had been blessed with stunning weather on the bank holiday Monday the weather took a turn for the worse, with a full strength gale coming in, accompanied by the occasional shower, not great omens for that’s days visit to an outdoor sculpture park at Carnoet, on one of the highest hills in Brittany. The hill is a remarkable sight, huge statues up to 5m high dot the hill, with every small village in Brittany having its own patron saint, the idea behind the project is to have every Patron Saint represented, which will mean over 1,000 statues when the project is complete. Interestingly, it has been built on one of the highest points in Brtittany so that each Saint’s statue can be orientated so that the saint is looking at his or her particular village.

Unfortunately for the translator, the wind was howling across the top of the hill, and most of the interesting back stories behind the saints were whipped away before they could be appreciated. While some hardy souls, notably Councillor Burgess, braved the weather to explore the whole site, most members took shelter in a nearby chapel, where a 40 piece Bretton folk band were in fine fettle. As previously mentioned, Brittany has strong association with the UK, and there were no fewer than 7 bag pipers in the band. The concert finished with a rousing rendition of Amazing Grace, which sounded astonishing on all the traditional instruments and soon had the large crowd singing along in a mixture of languages.

On the way home the group stopped to see some local Bretton crafts, including an 86 year old blacksmith making ornamental iron work, and a biscuit factory, and lots of local produce was purchased for the way home.

All to soon it was time to head back to the UK, with brief stop off at a town near the port of Roscoff, where the group visited a typical French market, and loaded up with items as diverse as clever double sided umbrellas, fruit, and of course an incredibly wide range of cheese.

Back in Teignmouth, Andy Benham, Chairman of the Teignmouth Twinning Association, commented:

˜I feel really lucky to have ended up living in Teignmouth, it’s a superb place to live and to have the chance to promote the town to our French friends is an opportunity to put a little back. The wide range of people in the twinning association come from all walks of life, and with a huge age range, and I absolutely love seeing them all meeting up with old friends and indeed making new friends. It was also great to see all the media coverage in France, although rather disconcerting to see my own picture appearing in France’s largest circulation newspaper, which decided to cover the event!

‘Plans are already well under way for next year’s visit, which will take place between May 10th and May 13th, I’ve already started talking to Teignmouth Council who have been very supportive and we’ve got some really exciting ideas for things to do with the French as well as perhaps widening the event to also take in some of Teignmouth’s specials interest clubs, such as golf and sailing for example.